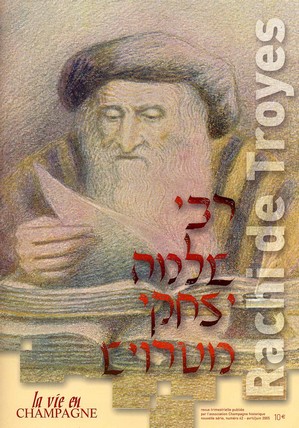 « We don’t take away any funerary stele in memory of the Righteous. The reminder of their teaching represents the best tribute we could pay to them.”
Talmud of Jerusalem – Treaty of Shekalim (II, 5)

SALOMON BEN ITSHAK, more known under the acronym of RACHI, Rabbi Chlomo, son of Isaac, born in Troyes in 1040.
Little is known about his youth, although we heard about many legends.
Rachi spends his young years at Troyes, before he leaves to go to Rhineland during a decade. There, he studies at the Talmudic schools of Mayence and Worms. In Worms, he studies with Jacob Ben YAKAR, student of Rabbenou GUERSHOM, also known as “The light of the Exile”.
Back to Troyes, Rachi founds his own Talmudic school at the age of twenty five years old. This Yechiva gets such a recognition that it will welcome students from all over Europe. Rachi will lead his school until the end of his life.
Maried in 1067, Rachi has three daughters that he marries to his best disciples. Those take over the passing on and the comment, thus forming the famous school of the Tosafists.
Rachi, considered as the wise character of his generation, dies on July 13th 1105 in Troyes, at the age of sixty five years old. According to the tradition, he would have died while writing the word “pure”. His burial site is still unknown, even though we can suppose that his tomb is in the middle of the Jewish medieval cemetery of the City of Troyes, which no longer exist today.
Rachi was called during his life by the nickname Parshandata, an Aramaic word meaning “the ultimate commentator”, a quality that we still attribute to him today.
He was called by this nickname by Abraham Ibn Ezra since the second half of the XIIth century in Spain.
Rachi develops a very modern exegesis (a deep study and critique of the Holy Scriptures) of the Bible and of the Talmud which will mark the interpretation of the sacred writings used in the Jewish religion. In his commentaries, he emphasizes the first meaning of the text, phsat, and his reasoning, taâm, with precision and concision, while insisting in explaining the text in its integrality. 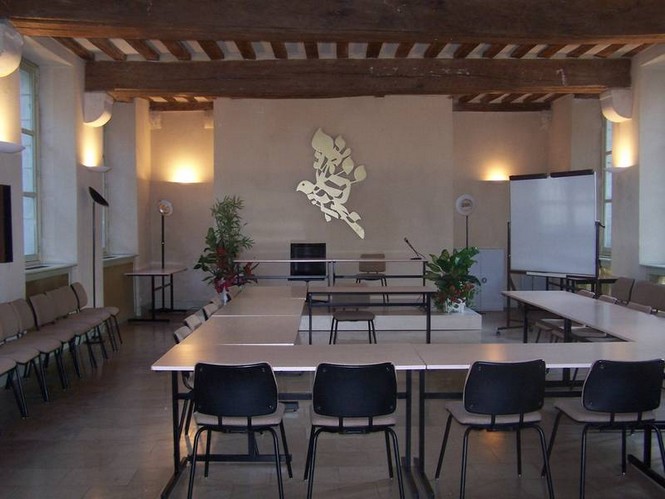 The European Rachi University Institute opened in 1989. This higher education institute is a university studies and Jewish research centre open to all.
In the room on the ground floor, you will be able to contemplate the sculpture made by Raymond Moretti (1931-2005), called “Yonah”. The Dove is made of Hebrew alphabet letters. It depicts the hope for peace and spirituality.
The institute also offers you to visit the exhibition “Rachi and the Jewish of Troyes during the Middle Age”, conceived by the media library of the area of Troyes in 2005 in collaboration with the Rachi Institute, for the commemoration of the 900th anniversary of the death of Rachi.
Free entrance: from Monday to Thursday, from 1:30 pm to 5:30 pm. On Friday: from 9 am to 1 pm.
Adress: 2 rue Brunneval, at Troyes. Phone number : 03.25.73.82.67 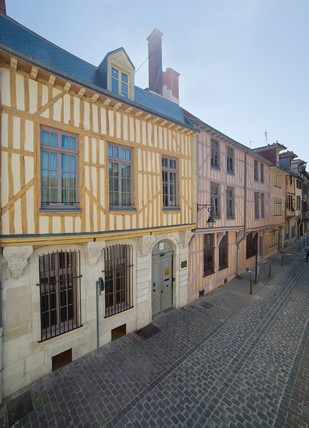 The current synagogue is located in a former abbey from the XVIth century. This large half-timbered dwelling shelters the synagogue since 1960. 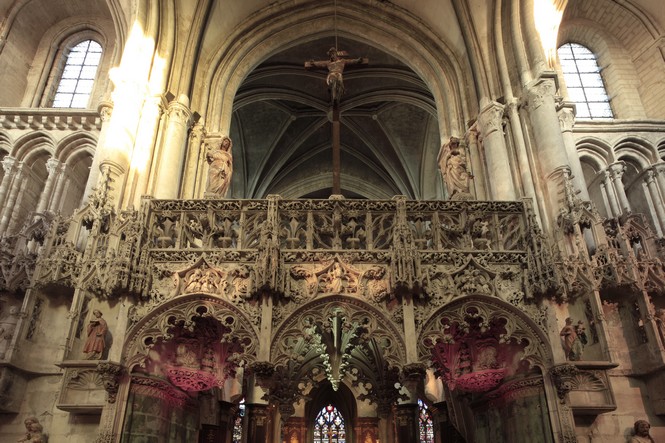 The Sainte Madeleine Church is the oldest church of the city. It is famous for the fineness of the sculpture of its jube (one of the last nine in France). The church shelters beautiful stained glasses from the XVIth century, which are said to be from the “Champagne School”. Among these stained glasses, you can contemplate “The tree of Jesse “.
This stained glass represents the genealogical ancestry of the Christ since Jess, father of King David. According to the prophet Isaiah, “A branch will come out of the trunk of Jesse, a sucker will grow from its roots. Upon him, will rest the Spirit of the Lord “. The iconography of the Tree of Jesse developed with the worshiping of the Virgin Mary at the XIIIth century, the commentators seeing the Virgin Mary in the branch, and seeing the sucker as being the Christ.
Jesse is usually represented as an old man, wearing a long beard on his face. From his chest comes out a tree, from which the last branch carries the Virgin holding Jesus in her arms. 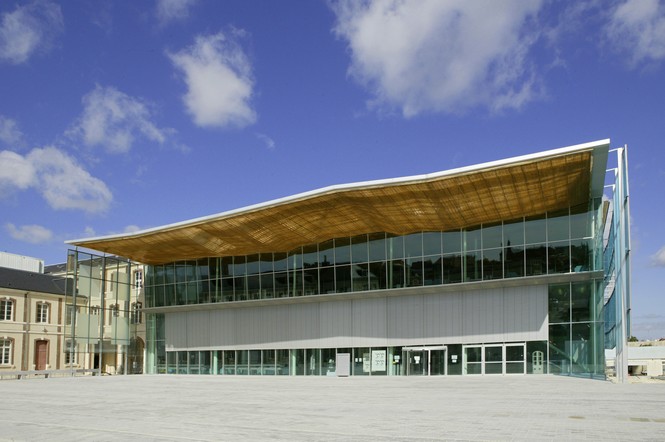 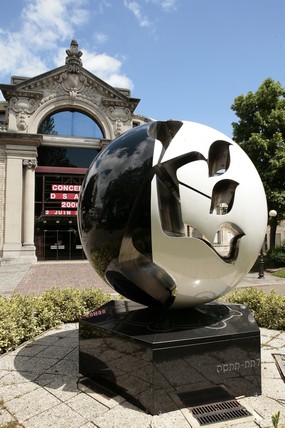 The monument of the sculptor Raymond Moretti dedicated to Rachi, unveiled in 1990, is located in front of the Champagne Theater. It is made of a carbon sphere that was put on a granite pedestal in a hexagonal form of 2,80 meters of diameter.
The artist drew his inspiration from the contrast of colors as Cabbale defines it.
You will see intaglio, the acronym of Rachi in Hebrew and the dates of birth and death of the great exegete. You will contemplate the sobriety of the monument which, originally, was equipped with a laser beam indicating the direction of Jerusalem. This laser was shut down in order not to disturb the planes flying other the area. 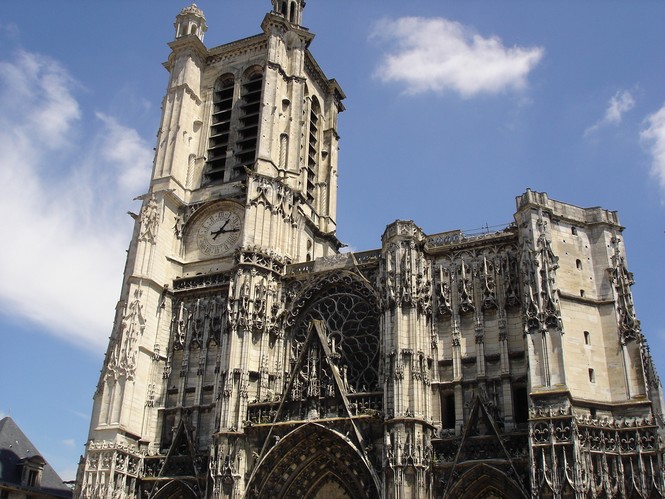 7 - The former Jewish quarter of the city: the Saint Frobert quarter 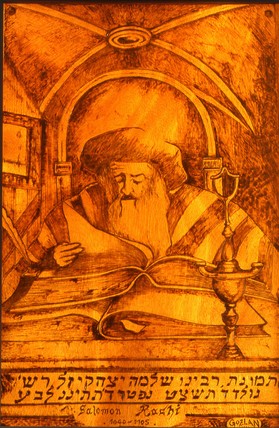 The Saint Frobert quarter constitutes the former Jewish quarter of Troyes. It includes the Hennequin, Saint Frobert, du Paon, des Cordeliers, Audiffred and Boucherat streets.
During the Middle Age, the Saint Frobert quarter carried the name of “Brush of Jews” or of “Jewry “. The Brush referred to the bushes that obstructed the streets of this quarter, close to the countryside.
At the XIth century, this quarter sheltered several Jewish families including Rachi’s family.
The Jewish community of Troyes could have developed thanks to the protection the counts of Champagne provided for them from the XIth to the XIIIth centuries, between the reigns of Henry the Liberal and Thibault IV. Even though the Jewish families would gather in this quarter, nothing could distinguish them from the rest of the population. It’s only in 1215 that the Church forced the Jews to wear a distinctive sign on their clothes which took the form of a yellow piece of fabric, called a roundel.
The Hennequin street is supposedly the location of the vineyard cultivated by Rachi to provide for his family’s needs. 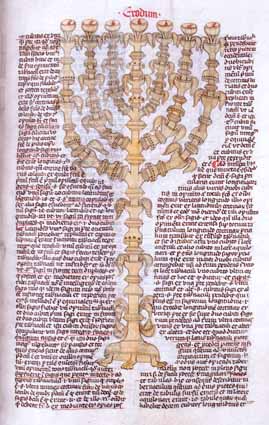 The Saint Frobert church, which disappeared after a fire in 1830, was built during the XVIth century on the location of the former synagogue of the quarter. Today, the building is a residential building. 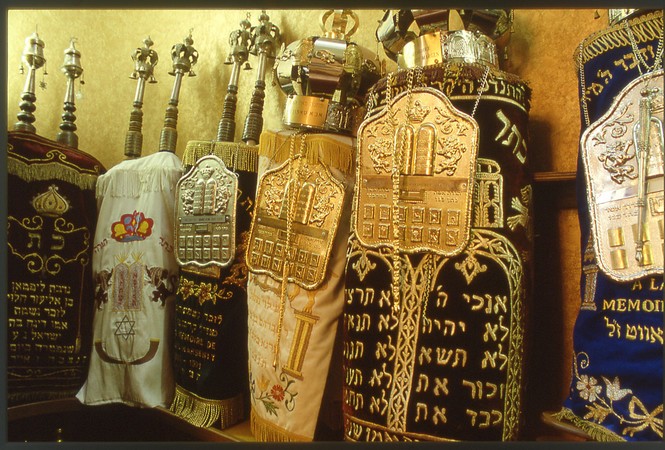 According to the descriptions that Rachi left about his place of living, we can assert that he lived in the Paon street, although we could not exactly determine the location of his house. 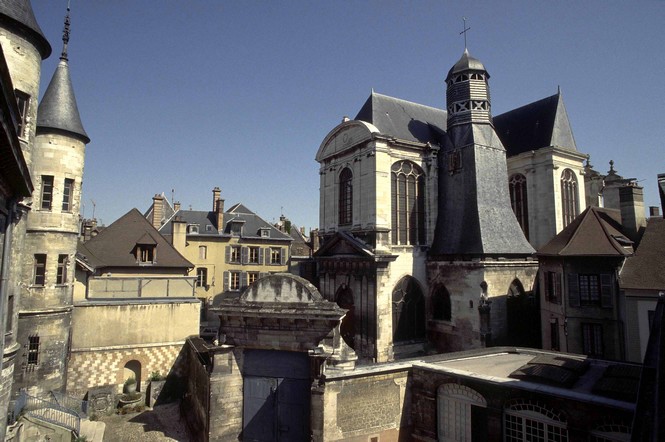 The Saint Pantaléon church was built on the place of a synagogue, taken away from the Jews by the King Philippe August.
At the end of the XVth century, merchants and rich bourgeois financed the building of a new church.
The new church shelters today sculptures from the destroyed churches of Troyes.